If I already watch Game of Thrones and Outlander, do I really need The Bastard Executioner in my life?

If I already watch Game of Thrones and Outlander, do I really need The Bastard Executioner in my life?

Yes, two hours. That, for starters, is a problem. Plenty of shows have hooked me with an epic pilot, but even with two hours, TBE didn't do that.

Beyond that, some random thoughts (and SPOILER ALERT!):

Would TBE have been more interesting without the origin story? What if it just started off in the middle and we had to fill in the blanks? Or would that have been too complicated with flashbacks and dream sequences?

Could the plot have been any more obvious? We knew the wife and unborn child would die and he'd seek vengeance, right? We've seen that over and over and over.

Speaking of, would it have been more interesting if she had gotten away, as you originally thought she would?

And even with the twist that she doesn't get away, isn't the person whom we're lead to believe killed her also a predictable plot twist?

Is it okay that for two whole hours I could not tell the difference between the Baron and that priest? Or the executioner and that soldier who let Wilkin's wife get away? Good thing one of each pair died in the finale to make things easier for me.

I like the saturated colors they use in the dream sequences, but that fade to black and white at each commercial break is a little too NCIS, no? And will be really annoying in binge watching.

Speaking of dream sequences, WTF was up with that dragon?

And speaking of the dragon, am I supposed to understand what his dragon tattoo means?

Did I miss how Bill Compton knows Wilkin? When did they meet?

Will I ever be able to see Bill Compton as any character other than that? And the same goes for Katey Sagal's Gemma.

And speaking of Sagal, let's just talk for a second about that Dracula-esque accent. Will I be able to not laugh / roll my eyes at that eventually?

Am I the only one wishing that Kurt Sutter's character wasn't (seemingly) so prominent in the story?

Was Ed Sheeran in the premiere?

Speaking of Ed.... the theme song and opening credits are nice, but maybe a little too much like SOA?

Despite all this, I'll watch for a little while longer. And probably develop a huge crush on Lee Jones.

Dr. Ken. Hoping this will be less obvious than the trailer. Mainly because I'm obsessed with that kid from Trophy Wife.

The Family. Quite a cast. Compelling trailer with family entanglement, political drama and a mystery, too. Will watch, if only for a season.


The Muppets. Easily the best/most anticipated trailer for this fall, or ever. Looks like the right kind of self-aware Muppets update.


Oil. Basically Dallas 3.0. And that voiceover... oof. But Kappie! And Chace! Likely to be my new guilty pleasure (since I refuse to watch any new Shonda series).


Uncle Buck. Love the movie, and this looks like a great update... with legs to go beyond the first ep. Let's hope it doesn't just recycle most of the movie's jokes.

Grandfathered. Could be funny, could be terrible. Most likely an overdose of Stamos with this AND Fuller House. The occasionally guest starring role or yogurt commercial is fine, but this could be too much. I mostly just like in the trailer when he doesn't want the kid's sticky hands on his pants... because I do the same thing with my niece. Also, can we talk about how ADORBS that kid is?!


The Grinder. A lot of familiar faces in the premiere, and I know everyone has been dying for more Rob Lowe since his Parks & Rec exit. And I love seeing Fred Savage back on TV.

Minority Report. I've been hearing about this one for a bit, and was confused as to how they'd follow up the movie. But I think they do a good job of clearing that up in the beginning if the trailer, which is nice. At first, I was thinking, "Do we really need another crime show about a psychic or super smart guy predicting crimes and catching killers?" but it might be interesting to see a guy who keeps falling short. But can it go on week to week without being boring and repetitive? Eh.


Rosewood. But not related to PLL or Ravenswood in any way. Typical crime drama but actually looks kind of fun, like Hawaii Five-O. Plus, I have missed Miami since Dexter ended.

Downton to end after next season

via TVLine: Downton's upcoming sixth season will be its last.

I can't say I'm surprised, or unhappy, with this news. For a show that started as a single mini series to then blossom into a full, successful series, I'd say six seasons is quite enough. It's time.

I'll miss spending my winter Sunday evenings with Mary and friends, but excited to see them wrap this up. Hoping for less Bates and Anna (just run away to America with Tom!), more Mary and [insert love interest's name] sparring, and please, please no death for the Dowager.
Posted by Danielle 1 comment:


Saw this a while ago, and obsessed with it. Find myself playing closer attention now t how text / phone / online  interactions are portrayed on TV. House of Cards, Broadchurch, Jane the Virgin and Babylon have all had interesting use of text.

Dexter's giant phone text will always be the worst.
Posted by Danielle No comments:

Post by Game of Thrones.
TBH I don't love this trailer. The music is almost U2-like.

On Callie and Arizona 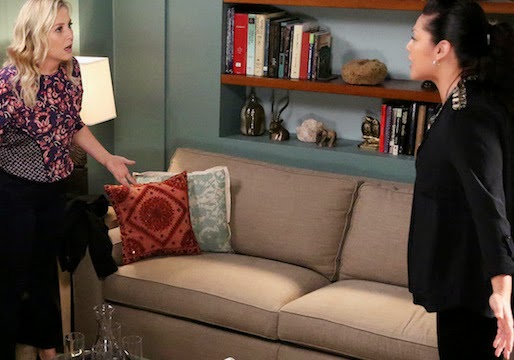 Michael Ausiello's wish for Grey's Anatomy in 2015 is to "resist the urge" to reunite Calzona. I could not agree more. While it was happening, I was kind of annoyed. These two had been thru so much – the cheating, the baby, the leg – and it seemed like another wrench was unnecessary drama. (Yes, I understand what show I'm watching... unnecessary drama is kind of its thing.) But that episode chronicling their separation was heartbreaking to watch. And I can't imagine going back from there.
Posted by Danielle No comments: 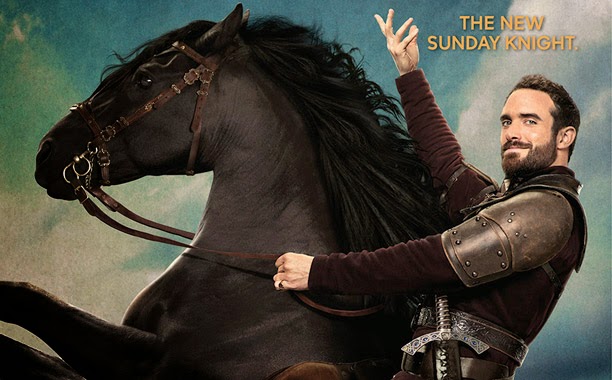 Admittedly, super excited for Galavant to premiere on ABC. When it was announced earlier this year, I said:

This is being described as The Princess Bride with music. Which sounds AWESOME. Looks hilarious. Trailer reminds me of Robin Hood: Men in Tights.

But what is puzzling to me, is that in the latest promos I have been seeing on ABC, they tease it as a "4-week event." Soooooo is it a mini series? Or an actual, regular show?

I had never heard it plugged as a mini series (or, as they're calling them these days, a 'limited series,' or an 'event'), though I do think that makes more sense for this concept. Seems like, at the rate that TV shows are being cancelled, almost every series should be called a mini series. Sigh.
Posted by Danielle No comments:

I'm (one of the few, apparently) that is happy to see Manhattan Love Story's life extended a bit thanks to Hulu. The streaming service will house seven unaired episodes of the failed rom-com. (And Selfie too, but I don't really care about that.)

Most people hated the show, but I actually thought it was really cute. I didn't think the internal dialogue was overused – in fact, it reminds me of the narration on Jane The Virgin at times, which I think borrows from the same whimsical space as another cancelled rom-com that I liked, A to Z.

Anyway, I like Jake McDorman (Greek, Shameless) but do agree that this role was sort of boring for him. I mean, he was so, so great on Shameless... and this role just felt amateur compared to that. I get that it's a network rom-com vs a cable drama comedy, but still. Analeigh Tipton was... fine. I just watched Two Night Stand this past weekend, and she's basically playing the same character (annnnnd pretty similar storyline to episode 4's 'It's Complicated' sleepover....). I'd agree with most critics that said the best thing about her was her perfectly curled hair.

Looking forward the catching the rest of the episodes on Hulu... and waiting for McDorman's next. better role.